One year ago today our family was finally HOME! Lani came home to us after 57 days in the NICU, and Libby came home on day 59. I remember walking out of those hospital doors for the last time like it was just yesterday. At a few days shy of being two months old, our girls got to experience the outdoors for the very first time. It was a hot and humid summer day, but I still remember both Lani and Libby lighting up at the change in their surroundings. No more white hospital walls, beeping screens, or confinement by monitor cords.  We were finally free to walk around and hold our children, to put them in their car seats, and to go somewhere else besides the four walls of the NICU.

After walking out of the hospital 56 times without my daughters, and having to dodge happy families loading up their cars with their “CONGRATS” balloons and their chunky adorable babies, we finally got to walk out with full hearts and full arms.  I know most parents probably panic when they bring their baby home for the first time, but leaving my heart at the hospital every night was excruciating. I remember feeling both intensely ready and intensely terrified. We absolutely loved our NICU staff, but we were so ready to all be home. Together.

We thought the hardest part was behind us, which in many ways that was true, but we still had many storms to face at home. I mean that both metaphorically and literally,  because we brought the girls home the same time that Hurricane Harvey hit Houston. The news talked endlessly about Harvey for weeks beforehand, yet it still felt like it came out of nowhere. I remember Richard and I both pacing up and down our hallways, each holding a crying baby, and begging for the Lord to protect our home. We watched helplessly as loved ones were evacuated by boat, and we had go-bags packed and ready in case we were next. Everywhere around us, within walking distance, was flooded and without power. God must have placed a guardian angel in front of our door, because by His grace alone we made it without even losing power.

We were grateful to be safe, but felt guilty because so many others we know and love dearly lost everything. Richard spent a good amount of his paternity leave helping others deal with the aftermath of Harvey, alongside my dad and our church, while my mum came to help me with the girls. It wasn’t the homecoming we had dreamed of for so long, but when your entire city is hurting, it does not matter at all. Even when it was so tempting to complain about simple things like sleep deprivation, I remember thinking “Sharon…at least you still have a bed. Be grateful.“

The other storm we faced was beyond the typical adjustment of having TWO “newborns.” Most babies with severe acid-reflux remain in the NICU for longer than ours did, but we were released to go home, under GI-specialist care, because the daily commuting was taking a toll on our family. We were factually prepared for what we were going to deal with, but I honestly have NO idea how we survived. We had two beautiful daughters that were constantly starving, but eating HURT. Even with my 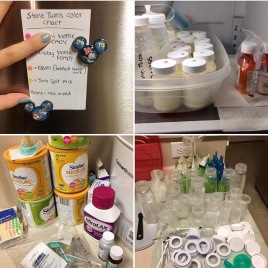 restricted diet and their multiple medications, it broke our hearts to feed them because they would scream the entire time.

Libby would also “fake eat,” or shut down completely. It was a very delicate “dance” to get her to take her bottle, and she would usually only eat for Mama. Libby was VERY close to having to get a G-tube put in, so that added a substantial amount of pressure to get her to take in calories. I remember tracking her intake on my phone, and feeling so defeated at the end of every day because it was never enough. They both had two different breast milk and formula mixtures, because they both needed added calories for weight gain, but Libby also had choking tendencies. I have never been more grateful for my type-A tendencies because it was quite the production to prepare their bottles.

By the time we fed them, held them upright for 30 minutes to reduce projectile vomiting,  pumped the next round of breast-milk, and then we washed bottles and made their next ones, it was time to feed them again. Richard and I averaged about 1.5 hours of sleep each night for the first several months. We called ourselves the “sleep camels!” When Richard went back to work, I took on as many night wakings as I could, and I barely made it through each day. Part of what made everything so difficult was I knew the difference between their normal crying and the “I HURT-crying.” I heard the the pain cry every single time they ate or had gas (i.e. ALL the time.) I often begged Jesus “Help me get through the next 5 minutes” because that’s all I could handle at a time. Richard usually came home to all three of us crying. I do not care what people say the “Terrible Twos,” or any other typically dreaded season, they will still be welcomed seasons after watching my girls in pain for the majority of their lives.

SIDE NOTE: I highly recommend getting a sleep monitor when you bring your baby/babies home to help prevent SIDS. We used Snuza Hero Monitors until they were both one-year old. I also highly recommend the Owlet Sleep Sock which is a bit more expensive, but everyone I know LOVES them. We would have probably purchased these instead if we didn’t need two at a time.  Sleep monitors are pricey, but you will sleep so much more soundly knowing that your precious baby is safe.

Another storm we faced was a bit unexpected. Everyone had been following our story and receiving daily updates on the girls while they were in NICU. I think this helped people feel involved and invested in our lives, which is usually a good thing. Then, when we came home with a list of visitor restrictions from the doctor, it was very difficult for some people to comprehend what our world looked like. I think most people, ourselves included, thought that leaving the NICU meant everything returned to “normal.” Oh, how wrong we were! Not only did our girls still have a lot of struggles to deal with, but we also needed the space and the grace to process what we had just been through. There is something that changes within you when you watch your children barely survive death’s grasp, and our family will never again be the same. We are always so grateful for each other, and much to people’s chagrin, our people pleasing tendencies have gone out the window.

I cannot say this with enough emphasis: do not go against your instincts as parents, or underplay the needs of your children, just to please other people. We upset a lot of people by keeping our girls home during flu season and following the medical guidelines for bringing preemies home, but we would not change a single thing. In April of this year, my girls had to go back to the hospital. They only had a simple virus, but we had to stay overnight because they became dangerously dehydrated. The doctors applauded us for keeping them safe during the flu outbreak, and told us that for our immune-compromised girls, it would have likely been fatal.

So again, give yourself the freedom as a parent to say “NO,” and know that other people’s hurt feelings are not your burden to bear. I think it took being completely overloaded with our own trauma to get to this point, but I hope others can learn this lesson from our experiences. My husband and I have seen so many other new parents crumble under the weight of other people’s expectations, and that isn’t the kind of stress you need in your own home. Speak your truth in love, then turn your phone to silent and just breath. Give yourself the space to learn how to navigate your new role in your new family.

Now with all that chaos you would think it was a horrible experience, but it wasn’t. Each day had pockets of reprieve. Maybe it was a little smile from one of our girls, when they were not hurting for once. Or maybe it was watching them snuggle each other, as you could clearly see they missed each other during those 59 days. Whatever it was, we leaned into it. You cannot control your situation, but you can control your attitude. We choose to pick JOY, daily. Each day the girls grew stronger, and each day we saw their vivacious spirits emerging. Lani and Libby spread light wherever they go. I have never seen two tiny people go through SO much and still come out of it with the biggest smiles you’ve ever seen. Lani and Libby have taught us, to be strong, to love deeply, and to laugh every single day. It has been the best 365 days of our lives having our family HOME.

To our girls, you both are the rainbow after the storm, our precious miracles from the Lord, and worth every single bit of the wait. We love you, now and always!

The place where the pain of infertility overflows into grateful parenting.

1 reply to Celebrating 365 days with our NICU grads!

This site uses Akismet to reduce spam. Learn how your comment data is processed.

All proceeds of this blog go toward paying off our NICU bills and funding our future adoption plans. Please support us by utilizi Affiliate Link:
Baby Best Sellers

Sensory TheraPLAY Box is the sensory toy subscription box designed for children with autism and those with sensory needs. Boxes are curated by a licensed occupational therapist and ship out the first week of each month.